I am happy to be in the world of Knights, dragons, and a fair maiden composing Universal Studio’s “Dragonheart Vengeance” with two time academy award nominee Helena Bonham Carter, director Ivan Silvestrini, producers Raffaella De Laurentiis, Hester Hargott, editor Charles Norris and some brilliant Universal Studio film makers. This is the fifth family film of dragonheart adventures infused with the timeless values of knighthood. It is said “A knight is sworn to valor, His heart knows only virtue, his blade defends the helpless, his might upholds the weak, his word speaks only truth, his wrath undoes the wicked.” I worked alongside a real Knight at Abbey Road Studios not that long ago. I was happy to see Sir Paul McCartney’s valor, virtue, humor, sincerity, enthusiasm, creativity and love for people up close. The film makers and I can’t wait for you to see and hear the Universal / Netflix Dragonheart Vengeance. 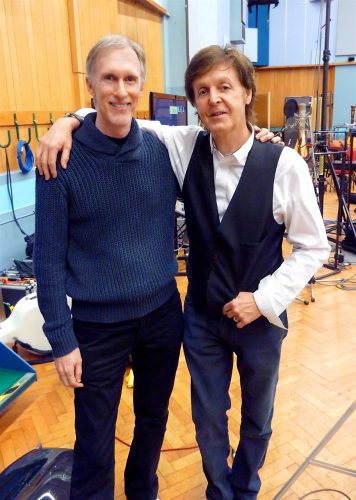